Springtime brings longer days and higher sun angles. The snowpack transitions from dry to wet. Accordingly, we must adjust how we manage our avalanche problems. With dry snow avalanches, we look at the relationship between stress and strength. If the strength of the snowpack exceeds the stresses we put on it, we can travel safely. The snowpack is very strong when frozen and quite weak when melted. As things warm up, and the snowpack begins to harbor liquid water, vapor transfer shuts down and we begin to see melt-freeze metamorphism. As the snowpack transitions from winter to spring, you have to ask how much strength the snowpack can lose before it can’t hang on to the mountainside any longer. I change my focus to the following concerns when thinking about how warm spring days can begin to change the avalanche conditions:

Spring doesn’t mean the end of powder skiing, and in many locations, some of the biggest and best snowfalls occur late in the season. When new snow falls, my first concern is how well it has bonded to the old snow surface. Firm and frozen springtime snow surfaces are often slick bed surfaces for storm slabs or loose snow avalanches. The first thing I check in the morning after or during new snow is how well the new snow is bonding to the old snow surface. This is quickly and easily done with a shovel shear, hand pit, or shovel tilt test. These tests are simple and quick, but shouldn’t be considered stability tests. They simply provide information about how well the snow has bonded. If new snow slides readily off the old snow surface, I become concerned with the possibility of new snow avalanches on steep slopes.The other problem with springtime snow storms is that the intense sun rapidly heats new snow and can change the day from one of carefree powder skiing to a wet snow nightmare. I watch for the first sign of rollerballs and pinwheels. Once these become large enough to injure a person or entrain snow below them, it’s time to head for the car. Pinwheels are an indicator that the snow surface is losing strength, which is the precursor to wet loose avalanches (also called point releases) which can quickly become very difficult to manage. 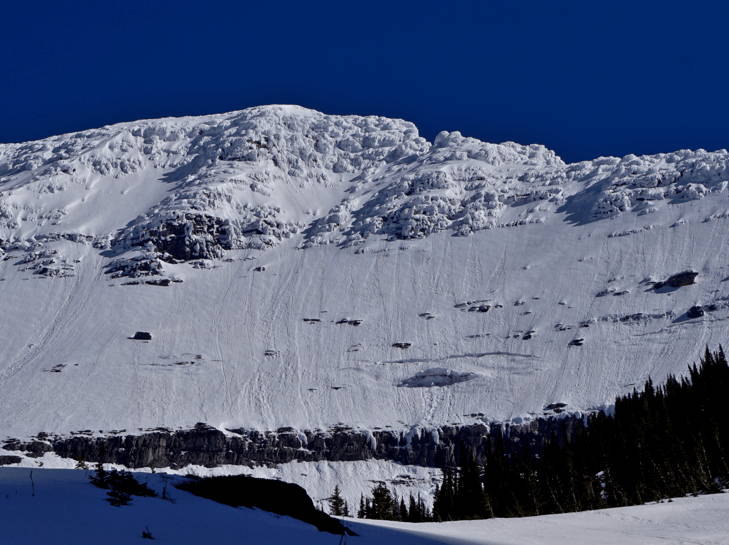 WET LOOSE OR POINT RELEASE AVALANCHES IN GLACIER NATIONAL PARK. NOTE HOW THEY START AT A SINGLE POINT AND FAN OUT, ENTRAINING LARGE AMOUNTS OF SNOW BELOW.

Melt-freeze metamorphism is simply the way the snow begins to change as liquid water is introduced to the snowpack. As snow warms, small grains melt first, followed by the bonds between grains. At night, when the pack cools, these grains freeze back together. The large grains grow even larger as they ‘cannibalize’ the smaller grains. After numerous repeated melt-freeze cycles, the snowpack becomes ‘corn snow’ and offers fun, safe skiing when in the frozen stages, and unpredictable, leg breaking skiing in the melt phase. When the right snowpack structure exists, wet slabs can be a difficult and dangerous springtime problem. As the snowpack warms and melts (from sun, rain or a combination of both), liquid water begins making its way to the ground, percolating through the snowpack. This can cause dormant pre-existing weak layers to ‘reactivate.’ If the slab above loses enough strength, the result is wet slab avalanches. 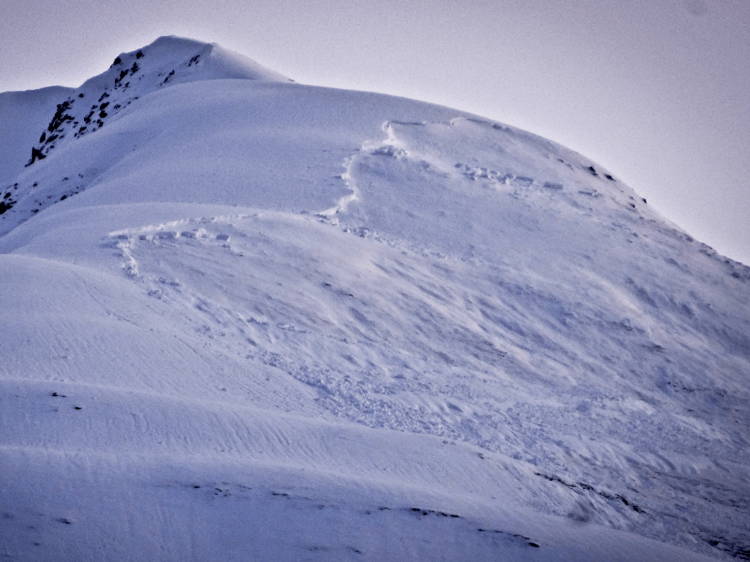 Wet slabs are often difficult to predict, even for the most seasoned avalanche forecasters, but here are a few rules to keep in mind: 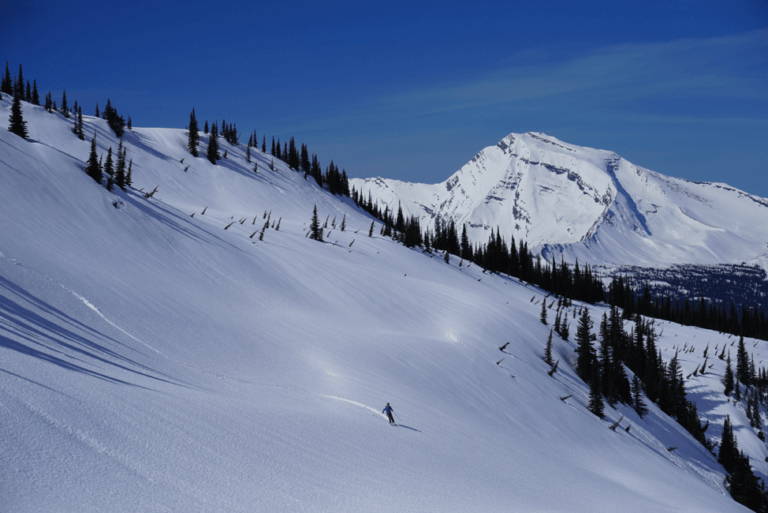 CORN SKIING ON HAYSTACK BUTTE IN GLACIER NATIONAL PARK. WHEN LEAVING TRACKS THIS DEEP, IT’S A GOOD INDICATOR THE SNOW SURFACE HAS LOST STRENGTH AND COHESION AND IT’S TIME TO HEAD FOR TOWN OR FIND A DIFFERENT ASPECT.

A glide avalanche occurs when the entire season’s snowpack fails at once, on or near the ground. These avalanches are highly destructive, and are the absolute hardest to forecast. The only management tool here is avoidance. Staying off and out from under slopes where glide cracks exist is the safest bet. There is some evidence that these often occur during the early morning hours, but not enough evidence to bet your life on. 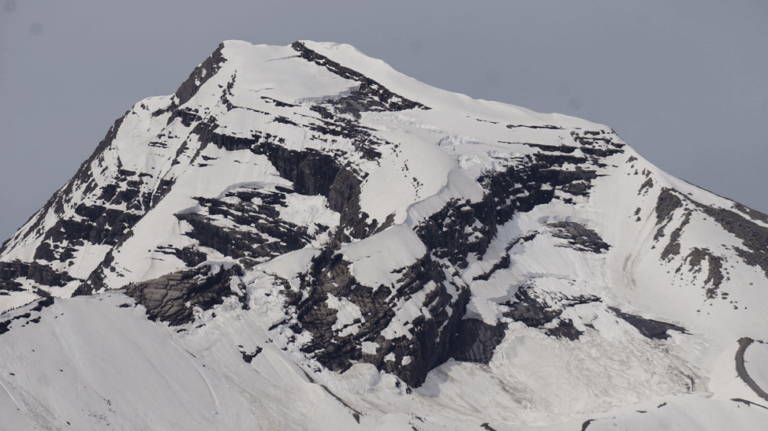 LARGE GLIDE AVALANCHES ON HEAVENS PEAK IN GLACIER NATIONAL PARK. IN SOME SPOTS, THESE CROWNS ARE WELL OVER 20 FEET DEEP AND INVOLVE HUNDREDS OF TONS OF SNOW.

Get out there, enjoy the spring sunshine and the longer days, but keep in mind that the snowpack is adjusting to significantly larger amounts of heat, and a different set of variables. By changing the way you think, most of these springtime problems can be easily managed. Choose your days, your terrain, and your exposure wisely.

Jake has spent more than 25 years working as an avalanche professional. He is currently a lead instructor for the American Avalanche Institute, an avalanche dog handler and trainer and an avalanche safety consultant to the resort and rescue communities. Off the snow, Hutchinson is a Certified Instructor and former Head of Instructor and Seminar Development for Gym Jones in Salt Lake City. He is currently involved in private personal training with an emphasis on high level functional fitness for mountain and military athletes.