When you wake up and turn on the AC in your car this summer, at Valle Nevado and La Parva, people will be spotting deep lines atop almost empty Andes chairlifts as they prepare to grab their fourth or fifth set of untouched tracks of the morning. Twenty-four hours earlier they strolled into sweltering airport connections in Los Angeles or Houston, conspicuous as rock stars with their long ski bags and carryon boots.

This is the magic of South America, how quickly it can transport you to some surreal winter landscape where you start to wonder if summer even exists. Where at night in the disco, laying in the heated pool, or toasting another heartbreakingly red and purple sunset after a local dinner of dark wine and pink steak, you start to wonder why you would ever go back.

If you’ve never gone, you’re probably running out of excuses. Airline tickets, hotel rooms, and especially meals are relatively cheap. For instance, for $2,200, you can pull together two plane tickets, a double room at Portillo, your lift tickets, all your meals and some very special events (i.e. ‘Wine Fest Week’). Then, at après, over fresh-made pisco sours, you’ll wonder what took you so long.

If you’re ready to go, here are three areas you have got to hit, and a guide service to help you get the most out of your South American ski experience. 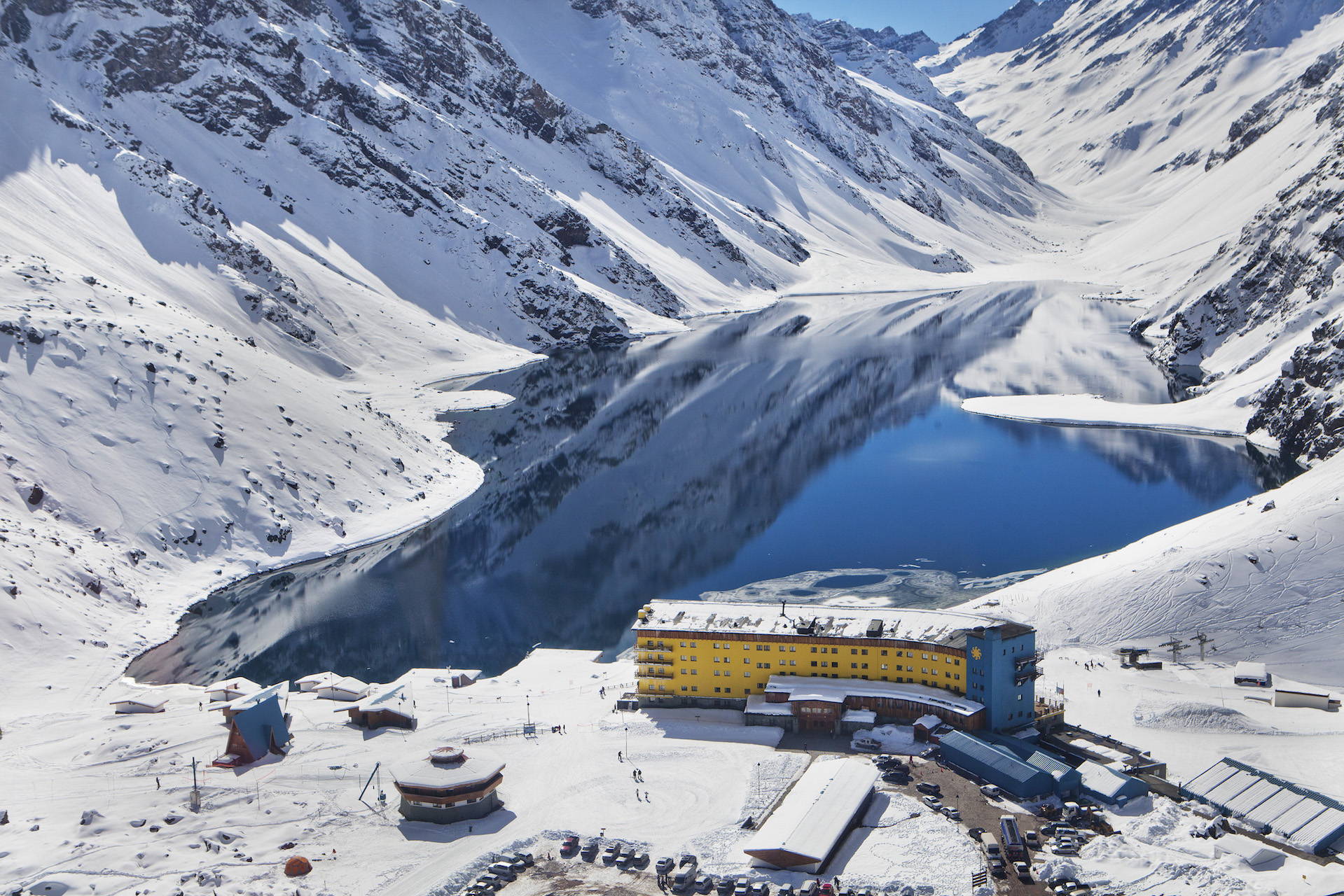 Portillo has a touch of magical realism. It’s partly the treeless slopes that rise steeply on both sides of the deep, blue Lake of the Incas. Partly the enormous, butter-colored hotel in the center of the mountain arena. Partly the open-slope skiing that ranges from merely scenic to the best you’ve ever had. The hotel is skiing’s equivalent of a cruise ship, with typical bookings lasting for a week—often for wine fests—two seatings each evening for incredible dinners in the main dining room, an often raucous piano bar, and a disco and full gymnasium in the basement, where hardwood soccer games, ping pong, and grudge foosball matches can carry on late into the night.

The Skiing: Portillos’ base sits at the foot of the Lake of the Incas, with the slopes steeply climbing away to the left and right. When the lake ices over, which is often, it opens up amazing possibilities off-piste. One must-ride is the legendary Roca Jack, a multi-person poma that rockets skiers straight up an imposingly stark face.

The Vibe: In the library, the bars, and always-crowded hot tubs, expect to see the world’s greatest ski bums rubbing elbows with South America’s elite. In the fall, when the racers come to train, don’t surprised if you’re crammed into an elevator with Bode Miller or Lindsey Vonn. Just try not to gawk.

Valle Nevado offers a more DIY South American ski experience, with deluxe to budget hotel options, a handful of apartments, and a wild, hairpiny turn up the mountain approach from Santiago that may have you wishing you had skipped breakfast. Set on a high plateau right in the middle of endless, breathtaking rock and snow strewn peaks, it feels very much like a skier’s idea of basecamp—one with good wine, good steak, eggs for breakfast, and endless lines to scout.

The Skiing: The lift-served skiing here is advanced to moderate, with tree-less ridgelines, bending valleys and fairly low-angle groomed runs to arc. The real adventure is in skinning for the steep chutes and faces above the lifts, grabbing some absolutely epic runs down to the roadside (where it’s best to plan your own shuttle), or venturing over into neighboring La Parva, regular host to world extreme ski comps.

The Vibe: The experience here can be a little harder to predict, being that you’re as likely to share the mountain—and bars—with a contingent of hard-partying Brazilians as you are with the locals or American ski company insiders. They all like beer, and powder, of course.

Prefer the old school, absolutely ski-focused flavor of places like Taos and Jackson Hole? Then Las Leñas is your kind of place. A little harder to get to, a little old-fashioned, this is one of those classic anti-resorts where the vertical is what comes first. The buildings resemble reclining deck chairs, angled to catch the sun and slough the snow. Above them, the terrain is wide-open and world class.

The Skiing: The secret to skiing here is catching the Marte Lift whenever it’s open. Like the tram at Jackson or High Rustler at Alta, there is no easy (or boring) way to ski down from this lift. When the snow is good, you can take your pick of some of the gnarliest, most photogenic lines of your life.

The Vibe: A true escape. Evenings are often low key if there isn’t some special event hitting the slopes. Bring your skins and expect to rack up the runs, hire a guide for some untracked if it hasn’t snowed in awhile, and drink beers with some of the original big mountain legends who first helped put Las Leñas on the international ski map.

If you’re itching to break free of the resort, charter a heli, or even just maximize your experience on piste, there’s no better ambassadors for South America’s snow secrets than Powder Hounds.

Additionally, if you’re looking for an off the beaten path adventure ideas, check out our top trip recommendations here.